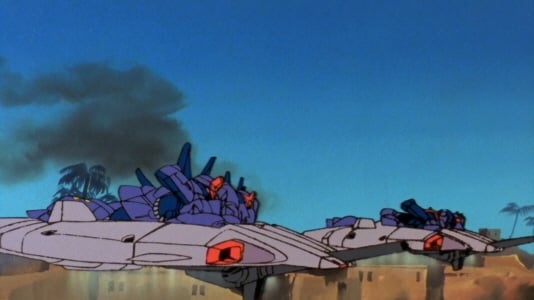 Judau is still upset about the death of his sister, and stays inside his shuttle. Loux gets him out violently, despite Puru trying to stop her. In the end, she realises she can't replace Lene, but will try to be like a sister to him. He seems consoled, for the moment. In the MS deck, Beecha and Mondo argue with Loux, but then she runs off in the Core Fighter. On board the Axis command ship, Haman tells Gremmi that she can handle the titans, and he should take care of the Kalaba Air Force before they can rendevous with the AEUG. It seems that Team August, now lead by Gremmi, is not happy being under his command. The Ahgama recieves a transmission about the impending attack on it's base, and goes to help. Elle launches in the type-100, Beecha in the MkII, Yelai in the Core Lander, and Judau launches in the Core Base. Loux is also caught up in the fight which follows. Beecha uses Loux's Core Fighter as a shield, and is distracted by her, and gives the chance for Beecha to destroy th