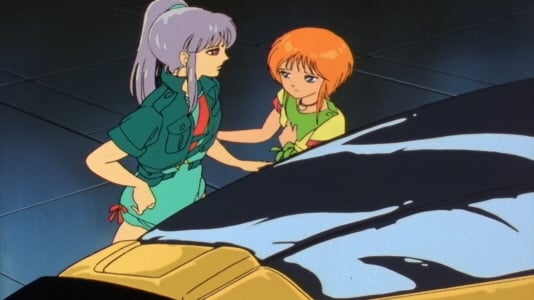 The episode opens with Loux touching down in her Core Fighter, and going in search of oil in a nearby city. With the help of a local man, she manages to get past the guards. He tells her he's an actor, and saw potential in her, and leads her to an underground city, similar to those on earth in the 1990's. On the Ahgama, Puru is causing trouble as usual, but hints to Judau that Loux is in the city. They decide to refuel there before the final push northward. On the road, Gremmi is found by a group of MS, known as the Blue Team, of the North Africa Independance Forces, who want to get rid of the Franica (people who live in the underground city). They tell Gremmi that if he can get to the control room in the city, they'll help him. He goes there, but runs into Loux. He beats up the man she's with, and runs off with her into the city. He talks to her for a while, but is distracted by the fight between the Blue Team and the AEUG outside. Loux walks off in disgust, and exits the city i