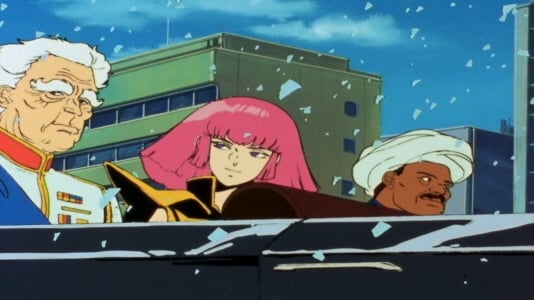 The scene opens with the celebrations of Haman Kahn and several other officers, as well as Mineva Zabi in a procession down the street. It seems that the remains of the corrupt Earth Federation, Titans and Neo Zeon are all gathered to welcome Mineva Zabi. Elle sees this and recognises Lene in the sea of faces, and reports to Judau. In the middle of the following night, he steals away in the Core Fighter, trying to rescue her by himself. Loux and Elle realise this, and follow him in the Zeta and Hyaku Shiki. They make a distraction outside the palace where the party is being held, and he manages to sneak in and find Lene. Unfortunately, Haman Kahn also is there, and senses his presence. She finds them, and shoots, hitting Lene in the stomach. Judau goes absolutely a-shit, and everyone around can feel his rage. Haman is terrified, and runs away, giving them a chance to escape in the Core fighter. As they evacuate, a giant airship appears, spewing out dozens of GM-III suits, which start d