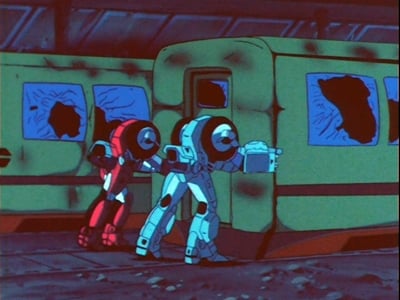 The Ballad of Breaking Up

In a devastated city, Stick's group is driven into the subway by the Refles' new mecha, the Gamo. What's more, they are sealed inside a small section of subway by the Refles' constant effort at their destruction. The Refles is not sure that the freedom fighters are dead, so she orders her Iigaa's to dig through the rubble. Tensions run high with the buried alive, what with the recent loss of Mint. Jim snaps and starts fights with both Rey and Stick. Jim's blow-up causes several people to think, especially Rey and Houquet. They decide to leave the group together, in hopes to find more people and possibly provide a little rest and relaxation for the group. However, deep down they both know that when they leave they are never coming back. Eventually, Rey engineers a nifty little escape, and the group escapes their would-be tomb. To their surprise, Mint is waiting for them near the other vehicles. The group is happy, but Rey and Houquet still decide to leave. Jim, Yellow, Aisha, and Mint decide to stay with Stick and keep fighting the Inbit. At the last moment, Houquet and Rey turn back and rejoin the group. The ordeal meant to split apart the group ended up unifying it, and Reflex Point is not far away.