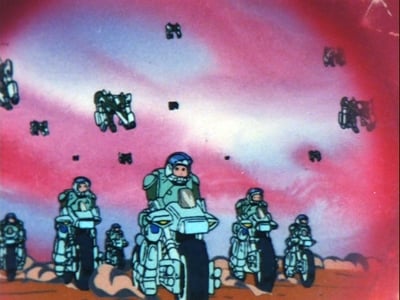 The battle for the Earth begins. Ground troops from the newly arrived human forces have linked up with Stick's band of freedom fighters. Jim has been reinstated in military. All is ready for the attack. A lot happens during this episode. During the fight, Rey professes his love for Houquet, which she returns. Yellow's Legioss is hit by an Inbit energy bolt, and is saved from destruction by Sorji. The rebels are led to the Refles by Aisha, and the Refles explains her plans. The episode ends with Stick vowing to destroy Batra, and the others are left inside Reflex Point with the Refles.