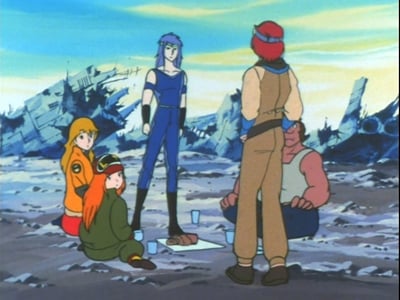 Requiem of the Battlefield

The rag-tag group of freedom fighters arrive at the fallback point of the Mars Base Recapture Missions. Unfortunately, the Inbit had arrived earlier and all that remains the invasion force is only a scattered hulks and corpse of ships, mecha and men. Stick was counting on this group is shocked and begins to lose hope in the mission. While on a scouting mission, Houquet and Rey find a naked woman who appears to be a battle survivor. In actuality, she is an agent of the Inbit Refles, engineered to spy on the freedom fighters. Houquet and Rey take her back to their camp. Yellow and Jim find several new fighters to add to their arsenal, and get to try them out against an Inbit patrol. Stick realizes that others are relying on him and enters into battle, destroying the Inbit patrol.