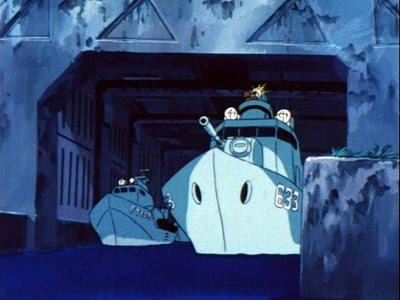 The group of freedom fighters are at the northern tip of what was once called "South America." They devise a plan to cross the body of water between the two continents, using old gasoline driven ships that they found mothballed in a local shipyard. The rebels busy themselves with their preparation for the crossing. The Refles is also busy. She has finally found the perfect life form to dominate the Earth: the human being. She immediately creates a Solugi (humanoid inbit) prince and princess of the Inbit named Batra and Sorji, respectively. The Refles sends her children to combat the rebels that have corrupted her secret agent, Aisha the female who the group has adopted and has no memory of her past. . However, Sorji has similar problems to the lost secret agent. Human emotions are her downfall, and cause her to hesitate when it comes to destroying Yellow. The beginnings of love occur between Sorji and Yellow Belmont. Eventually, the rebels' cunning and courage fight off the Inbit and they make it to the northern continent.