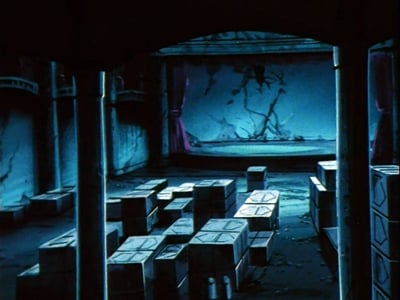 Stick's rebel group is only a day or two away from Reflex Point, but they are badly in need of energy. They stop off in the remnants of New York City. Posing as homeless people, Rey, Yellow Belmont, and Mint find the local Inbit energy cell storage. The group decides to steal some energy cells. Unfortunately, Mint drops some hydrogen canisters, alerting the Inbit to their presence. They are only saved by a would-be actor, who convinces the Inbit that a stray cat was the cause of the commotion. Meanwhile, under pressure from the Refles, Batra decides to destroy all of the inhabitants of New York City. Sorji tries to stop him, but decides to use the situation as a chance to speak with Aisha. Again Aisha refuses to acknowledge that she is an Inbit. Stick, Jim, and Houquet are the only ones close enough to mecha to fight Batra and his troops. Yellow stages a concert to give hope to people, and the group is rejoined. Amazingly, the small group of freedom fighters stage a successful counterattack against the Inbit, destroying the local Inbit hive and freeing New York.