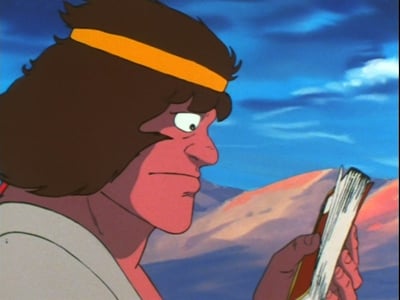 Stick's group of fighters continues on their journey to find the Inbit's main hive, making a stop in a small town at Jim's urging. Jim made a promise to a friend he had in his unit, who died in an Inbit attack during the First Earth Recapture Mission. His promise was to deliver a book to his friend's father who lives in this town. The group gets behind Jim's effort and his happy to spend a little time in a small town. Unfortunately, the townspeople don't feel the same way. The group begins to notice that the townspeople are giving them the runaround. Eventually, after some of the group gets kidnapped, Jim forces an explanation out of the mayor. It turns out that the father of Jim's friend tried to keep the townspeople out of the war with the Inbit. He wanted them to leave the fighting to the soldiers. The townspeople wouldn't stand for the interference. In the end, they killed the peacemaker. Jim is disappointed, and ends the episode in a melancholy mood. He decides to keep the book to remember some of the things that the father of his friend stood for.