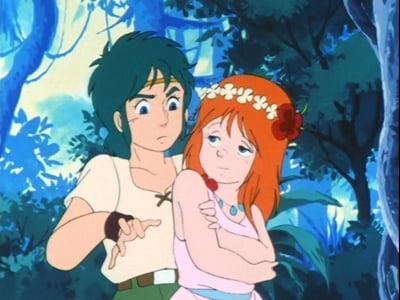 The journey to Reflex Point takes Stick's group through a jungle near a giant Inbit stilt hive. This jungle is inhabited by a primitive tribe of people who worship the gods of the river, and believe that the rebel group has angered the river god. Meanwhile, the Refles creates a new type of Inbit mecha meant to provide heavy resistance to the Earth people. She begins to deploy the prototypes in an effort to attack the freedom fighters. The rebel band helps the river tribe defeat an Inbit patrol and please their river god. They then slip under a huge Inbit hive in rafts. This saves immeasurably on energy cells and keeps the Inbit from detecting their energy use. However, the freedom fighters are in low spirits after leaving Mint behind to marry McGruder, a tribal prince.