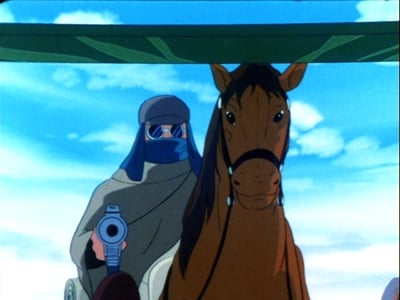 From the mountains to the desert. A few small towns are eking out a meager existence in the shadow of a huge Inbit transmission tower. Stick and the other rebels, still on their journey to Reflex Point, must find a way around or through the Inbit hive. Unfortunately, some members of the group have other things to deal with as well. Stick and Rey are captured by a local police force, and a local thief force steals their Ride Armors. Yellow and Aisha are taken in by some equipment wholesalers who just happen to be comrades of the thieves who stole Stick and Rey's Ride Armor. It turns out that these thieves are ex-Mars Base soldiers, who fought against Inbit right after they captured the Earth. They quit the service, they had seen too much war. By the time Stick finds the thieves, Yellow has heard their story and forgiven them for their cowardice. Stick does not forgive them so easily, they earn his respect only when they show up in a battle against the Inbit, when they sacrifice their lives to destroy the hive. It is a haunting episode, filled with duty, love, remorse, and forgiveness.